I enjoy making pizzas at home for several reasons: it's easy, it's cheap, and I can control the ingredients. I recently made a proshiutto pizza and it proved to be an automatic hit. While making pizza at home is definitely simple, there is a little prep work involved. 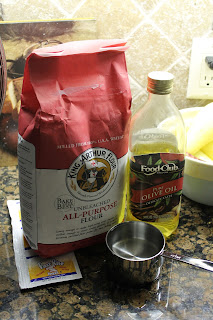 In a large mixing bowl, combine 3 cups of flour with 1 teaspoon of salt and italian spices of your choice. I sometimes add Thyme for a twist. Then add 1 tablespoon of olive oil to the flour mixture.

Before you can add the yeast to the flour mixture, you must proof it. In a small bowl, combine 1 cup of lukewarm water and 1 tablespoon of yeast (or a yeast packet). Allow the yeast to proof for about 5 minutes. 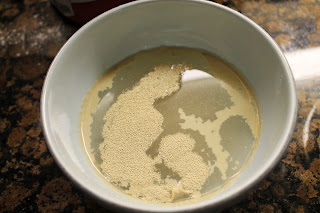 When the yeast is ready, it will be foamy and give off an odor resembling bread. Slowly pour the yeast into the flour mixture. Mix it with a dough hook on the lowest mixing speed. If your dough does not combine well, add 1/2 teaspoon of water. 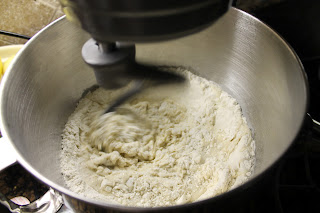 Once combined, shape the dough into a nice round ball and place it into a well oiled (olive oil) bowl. Cover the bowl with a damp flour sack cloth towel and allow the dough to rise in a warm area until it doubles in size. 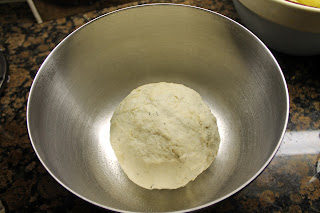 I like to make the dough in the morning and leave it until dinnertime, however, dough will rise within 2 hours. 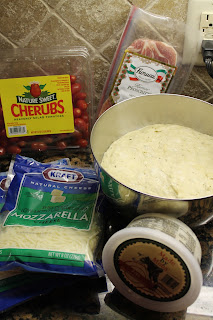 This is where the only limitations to your pizza are your imagination and taste buds. I used proshiutto, mozerella, feta, parmesean, cherub tomatoes, fresh basil from the garden, and baby spinach, as well as a jar of my favorite marinara sauce.

Poll the family before purchasing toppings - you might be surprised at what they are willing to try!

Once you've got your toppings together and your dough is ready, the process of making the pizza begins. Divide the dough in half - you're going to make two pizzas! You can also divide it again and make 4 personal pizzas. The dough may also be frozen for future use.

I let me youngest son roll out the dough for the pizzas. It keeps him busy and he enjoys cooking in the kitchen with me. To ensure the pizza doesn't stick, spray a little olive oil on to the baking stone or sheet. (Preheat your oven to 400 degrees.) 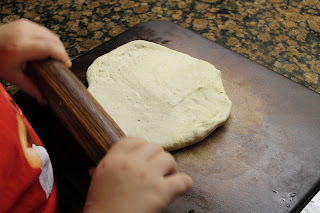 Next, spread out your marinara sauce to the edges of the pizza. This is an important step and how many pizza restaurants build their pizzas. If you don't take the sauce all the way to the edge, the crust will dry out and become hard. 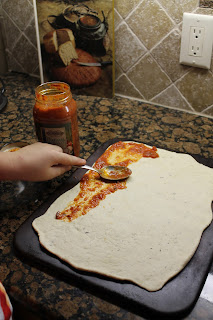 Your next layer in the pizza building process should be the cheese(s). Some people will place pepperoni under the cheese in order to keep it from burning, but since we didn't use pepperoni, we put the cheese down first. The youngest also added his proshiutto. This is the boys' finished pizza. 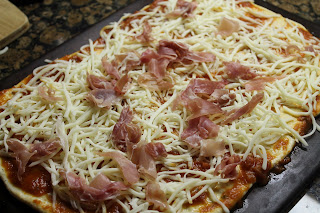 On the adult pizza, I took it a step further and added the fresh basil and spinach. I typically would add mushrooms and onions, but we were out of those and I didn't want to make a run to the grocery store. If you add sausage, you should cook it prior to placing it on your pizza. 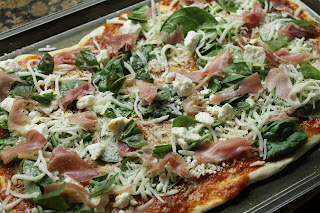 Bake your pizza for 15 to 20 minutes or until the crust is golden and the cheese is melted. Cut into slices and serve. 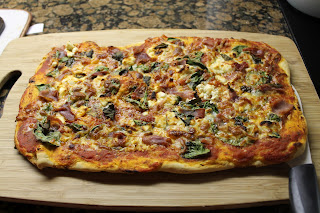 This was incredible. Jake said it was the best one yet!

What are some of your favorite pizza toppings or spices?
Posted by MichelleNorris at 8:56 AM