MomLife Boot Camp Recap :: Part 1 - The Meaning of the Churro

I'll be honest. I wasn't sure exactly how this event would turn out. Initially, I was enthusiastic about going to the first-ever MomLife Boot Camp, but as the time got closer to attend the conference, I was starting to feel less excited. My husband had just returned home from a business conference last Friday and I was headed out the same afternoon. Adding to the anxiety I felt creeping slowly up, was the fact I had not been away on my own ever. Well, at least not since I got married and had children.


I was offered a reprieve when my friend, Stacy, decided to join me on this first (one of my many firsts this year) on-my-own adventure. I picked her up and we headed to Tyler, stopping for a sweet tea from McAlister's. We didn't have to drive long before we reached Pine Cove, the Christian camp overlooking Lake Palestine. Little did we know, there were women attending from Nebraska, Wisconsin, and even Michigan. I could not believe so many ladies had come from so far away. 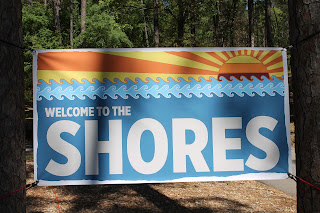 At check-in, we were given a map of the camp and a little envelope. Stacy and I both thought the envelope held our cabin key inside, but we were surprised when instead it was a little note welcoming us, thanking us, and praying for our own unique opportunity that weekend. Every lady received their own special note, no two were similar. Mine read:

"We are really excited that you are attending the FamilyLife MomLife Boot Camp. We pray that it will be a refreshing time for you. We appreciate all the hard work and sacrifice you do for your family every day. God Bless, Brian and Tonya Devine."

A stranger appreciated my hard work and sacrifice? Wow! The weekend was off to a good start! A prayer for refreshment? These people know me! I definitely needed refreshment, too.

Our cabin was adorable. With 4 sets of bunk beds and squeaky clean restroom and shower facilities, this was the cabin equivalent of a 4 star hotel. Our bathroom had been decorated with burlap pennets and cutesy felt flowers. There were even chocolates laid along the sink (definitely my kind of place!).


After making our beds and putting away our luggage, we noticed little blue boxes sitting on the shelves at the head of each bunk. The MomLife staff had left little Survival Boxes for each of us. Inside were: Mom mints, a hair tie with a felt flower attached, hand sanitizer, more chocolate, an adorably odd clip, and tissues. I was thrilled at the thought of a random gift awaiting my arrival. 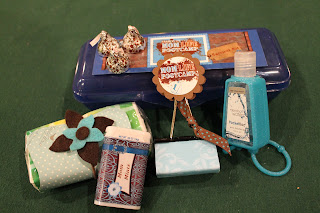 The first time we all came together Friday night, we met in the dining hall for dinner. We were introduced to our program director and leader as well as some of the college kids serving us throughout the weekend. The dinner menu included beef and chicken fajitas, rice, beans, salad, and churros. The minute I saw the churros, I laughed out loud. I had to explain the meaning of the churro to Stacy.

The night before, I had a dream about going to two different places looking for churros. I had such an intense drive in my dream about finding a churro that the dream itself felt like it went on all night. In all actuality, it probably lasted only a few minutes. However, it was such an odd dream, that when I awoke I remembered how much I had to have a churro.

When we lived in San Diego, the boys and I would walk all the way to the back of the San Diego Zoo to see the Polar Bears and buy a churro. In fact, I'll go so far as to say those were the best churros I've ever eaten. But, since San Diego, I have only had a churro or two in the past three years. It's not something I typically crave or even see now that we live in East Texas. And yet, I dreamt about it and then had it for dinner.

So, you may be thinking, "What can be gleaned from a churro at dinner?" Let me tell you. I was not a hundred percent sure I had made the right choice to attend MomLife Boot Camp, especially since my husband just came home. But here was God, smirking, and basically saying, "Michelle, you are exactly where you need to be."

Do you ever feel like sometimes what you think isn't the way you should go, in fact, turns out to be the best direction to turn your feet?

The LORD will guide you always; he will satisfy your needs... Isaiah 58:11


Posted by MichelleNorris at 9:06 PM