The Review Is In :: You Don't Know Me by Susan May Warren 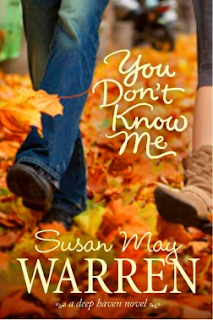 Annalise Decker is the model citizen, soccer mom and perfect wife, at least that is what the community of Deep Haven believe, including her family. She’s actually Deidre O’Reilly, former drug abuser from St. Louis, whose testimony put a dangerous criminal in prison. Her handler, Agent Frank Harrison, helped her to be reborn as Annalise by faking her death and erasing her past. Frank believed Annalise would be safe in Deep Haven, until now.


Fast forward twenty years and Annalise catches a glimpse of Frank entering the local coffee shop and knows she’s no longer safe, her family is in danger and she has to make a choice: leave or stay.


Susan May Warren’s You Don’t Know Me is a constant page-turner from the moment Annalise locks eyes with Frank. The life she knows and loves is forever changed in an instant.


While a romantic thriller, Warren’s novel also broaches the subjects commonly discussed in marriage: sacrifice, betrayal, trust, love, honesty and family. Yet, Annalise’s story pushes each of these themes to the extreme as readers are taken on a ride of emotional strife.


You Don’t Know Me primarily focuses on Annalise; however, the title is applicable to several main characters. Annalise’s husband, Nathan Decker, strives to prove to his community and himself that he is nothing like his father – the man who killed a fellow Deep Haven resident while driving under the influence. Yet, his mayoral campaign’s financial debts are a secret he hides from his wife. Annalise and Nathan’s eldest son, Jason, wants nothing more to be than Romeo in the upcoming school play. He and Annalise keep his audition secret from Nathan further fueling marital stress. Claire, the Decker’s middle child, feels her mother doesn’t know her at all, especially when it comes to her boyfriend, Tucker (an off the cuff kid whom always seems as if he is up to no good). However, Tuck is a teenager who has had a rough life and is just looking for acceptance, much like Nathan Decker.


Warren’s characters have a natural depth making them realistic, believable and relatable. Who hasn’t wanted to fit in, feel accepted and be known for what was truly in their heart?


Aside from a wonderfully written Christian novel, Warren includes discussion questions for readers to ponder, making You Don’t Know Me a great book club read. 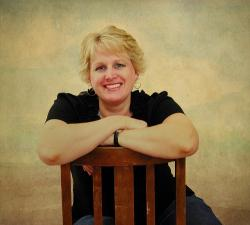 ﻿
Susan May Warren is the RITA award-winning author of more than thirty novels. For more information on her new release, previous titles and more, visit her website. Here is a link to purchase You Don't Know Me.


{Side note, Susan May Warren got her inspiration for You Don’t Know Me while on a flight. She sat next to a distraught woman and asked how she was doing and why she was traveling. Warren discovered the woman was visiting her daughter for one last time. Her daughter witnessed a murder and she needed to enter the Witness Security Program.


When I wrote this blog post, I was flying to Wyoming. I wondered what each passenger on my flight had encountered in their lives; as well as what stresses they were currently experiencing. Thank you God, for all of my blessings.}

Please visit my disclosure policy regarding this review.
Posted by MichelleNorris at 5:07 PM

Email ThisBlogThis!Share to TwitterShare to FacebookShare to Pinterest
Labels: book review, susan may warren, you don't know me