The Review Is In :: The Stars Shine Bright 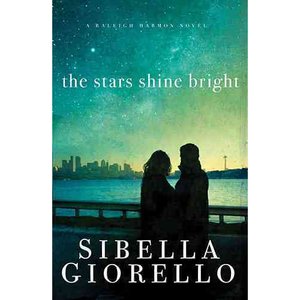 I recently read my first Christian suspense novel and I thoroughly enjoyed it. The Stars Shine Bright by Sibella Giorello is a novel about an FBI agent named Raleigh Harmon. This story is one of many about the agent's life, career, and cases.

In The Stars Shine Bright Agent Harmon finds herself trying to recover from a failing career while on an undercover operation at the Emerald Dunes horse track. First believed to be the scene of race fixing by the mob, Raleigh soon learns there is a much sinister plot unfolding involving home grown terrorism. Raleigh is also battling personal conflicts: her mother's recent committal to an asylum once she learned of Raleigh's secret career; Raleigh's wealthy Virginian fiancee DeMott's nagging rush to marriage; and her precocious, yet handsome, boss' affection.

Caught up in her love for work, she finds herself beginning to question marriage and this sacred promise to DeMott. Among other hot button issues, abortion is discussed when Raleigh discovers Ashley, a horse groom, is pregnant by a man unwilling to keep the child. Lying to loved ones becomes another prevalent theme throughout the novel.

My favorite excerpt from the book is when Raleigh finds herself at her lowest and recalls a conversation between her and her deceased father:

"At some point, life will seem difficult to you. Really difficult. That's life - Raleigh, look at me."

"When those hard times come, I want you to remember how Galileo found the truth."

He laughed. "Yes, that was part of it." But he pointed to the sky. Black velvet. White lights. "Those stars are there, every day, waiting in the blue sky. We just can't see them. This is what I want you to remember. The stars shine bright when it gets dark enough. The invisible becomes visible."

I don't want to spoil the story line for anyone, so I won't give out too many details. However, I did want to point out how nice it was to read a suspense novel without any off-putting language or content; more often than not, writers rely upon these devices to get the point across. I think Sibella did a marvelous job of conveying her thoughts without including these items.

I enjoyed how the author also worked Raleigh's scientific background of forensic geology into the story. Excerpt:

"There's a pervasive theory in geology called uniformitarianism. It's a long word for the basic idea: the landscape seen today were formed by continuous forces exerted over millions of years...But Bretz, who had a PhD in geology, wrote, it could only result from a massive flooding. In fact, one flood."

This gave more credence to Raleigh's character, as well as Sibella's writing. I loved how science and Christianity melded together to reveal such a dynamic character as Raleigh Harmon.

Sibella Giorello has previously written The Rivers Run Dry, The Clouds Roll Away, The Mountains Bow Down, and Stones Dry Out. She has received two nominations for a Pulitzer prize for previous works. Giorello is also inspired by the Bible in her writings, but notes, "Whenever I say that, some people groan, but those 66 books are sheer poetry, and they cover the most crucial questions. Who is God? What's life all about? Why are we here and what's the plan - for individuals and for humanity?"

I'm so pleased to be a part of this blog tour. For other blog reviews, please visit http://litfusegroup.com/blogtours/13526914/sibellagiorello. You may also purchase The Stars Shine Bright here.

{I was provided a copy of The Stars Shine Bright by the publisher, Thomas Nelson}

Posted by MichelleNorris at 8:04 AM