Last August, my youngest son began gymnastics lessons .He enjoyed walking on the balance beam, learning basic rolls, cart wheels and hand stands. However, last month he realized he was still the only “big kid” left in his class now filled with 4 and 5 year olds. He’s seven by the way.
We enrolled him to help improve his balance and coordination. Gymnastics really helped him grow in these areas. Yet, to him, he was not improving at anything and not advancing with his age appropriate friends. The last day he attended class, he walked off the mat sullen.

So how could we turn that frown upside down? Simple! We built a rock wall from the money we were going to spend on another month’s gymnastics class.
My husband drew out designs, made a shopping list, and went to town. $72.15 later, he had all the lumber and materials he needed. We got to work! His design included an overhang and incorporated the rock grips we had purchased on sale at R.E.I. for $15. His friend, an avid rock climber, helped to layout the route and ran the trial tests before the boys were allowed to climb. 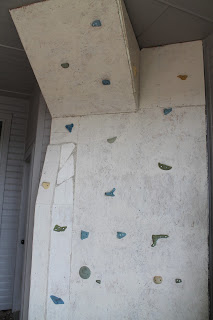 After about 6 hours of work, split between 2 days, the amazing wall was completed for only $87.15! This price also includes the lumber to build the balance beam, which will be finished at a later date.
(For safety reasons, I ordered a Mad Rock portable Mad Mat from Amazon.)

Posted by MichelleNorris at 2:33 PM