The Review is In :: The Tree of Water by Elizabeth Haydon 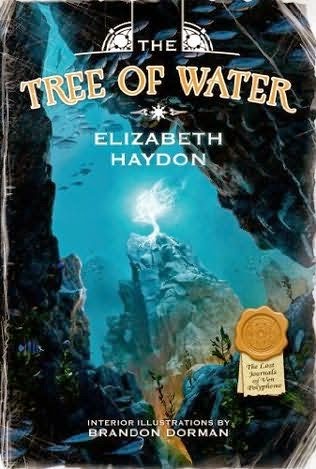 As Royal Reporter of the land of Serendair, it is the duty of young Charles Magnus "Ven" Polypheme to travel the world and seek out magic hiding in plain sight. But Ven needs to escape the clutches of the nefarious Thief Queen, ruler of the Gated City, whose minions are hunting for him. His friend, the merrow Amariel, has the perfect solution to his dilemma: Ven and Char will join her to explore the world beneath the sea.

As they journey through the sea, Ven finds himself surrounded by wonders greater than he could have ever imagined. But the beauty of the ocean is more than matched by the dangers lurking within its depths, and Ven and his friends soon realize that in order to save thousands of innocent lives, they may have to sacrifice their own. For everything in the ocean needs to eat…


The main character in The Lost Journals of Ven Polypheme series is Charles Magnus "Ven" Polypheme. Tell us about him.
Ven was an interesting person, but he really didn’t think so. He and his family were of a different race than the humans who made up most of the population where he lived, the race of the Nain. Nain are an old race, a little shorter and stockier than most humans, with a tendency to be on the grumpy side. They live about four times as long as humans, are very proud of their beards, which they believe tell their life stories, don’t like to swim or travel, and prefer to live deep in the mountains.
Ven was nothing like the majority of Nain. He was very curious, loved to travel, could swim, and longed to see the world. He was actually a pretty nice kid most of the time. He had the equivalent of a baby face because only three whiskers of his beard had grown in by the time The Tree of Water took place, when he was fifty years old [around twelve in Nain years]. He had a great group of friends, including the merrow and Char, who were mentioned earlier. It is believed that his journals were the original research documents for two of the most important books of all time, The Book of All Human Knowledge and All the World’s Magic. The only copies of these two volumes were lost at sea centuries ago, so finding the Lost Journals is the only way to recover this important information.

Are there more books coming in this series?
Well, at least one. In the archaeological dig site where The Tree of Water was found was another journal, a notebook that Ven called The Star of the Sea. We are still working on restoring it, but it looks like there are many new adventures and different kinds of magic in it. The problem is that it might have been buried in the sand with an ancient bottle of magical sun tan lotion, which seems to have leaked onto some of the journal’s pages. This is a very sad event in archaeology, but we are working hard to restore it.
As for other books, it’s not like we just write them out of nowhere. If we haven’t found one of Ven’s journals, there can’t be another book, now, can there? We are always looking, however. We’ve learned so much about ancient magic from the journals we have found so far.
You are a best-selling author with other books and series for adults. What made you want to write books for young readers?
I like young readers better than adults. Everyone who is reading a book like mine has at one time or another been a young reader, but not everyone has been an adult yet. Young readers have more imagination and their brains are more flexible—they can understand magical concepts a lot better than a lot of adults, who have to deal with car payments and work and budget balancing and all sorts of non-magical things in the course of their days.
Besides, many adults scare me. But that’s not their fault. I’m just weird like that.
I think if more adults read like young readers, the world would be a happier place.
Tell us where we can find your book and more information about where you are these days.
You can find The Tree of Water anywhere books are sold, online and in bookstores. There are several copies in my steamer trunk and I believe the palace in Serendair also has one. I also sent one to Bruno Mars because I like his name.
At the moment, I am on the beautiful island of J’ha-ha, searching for a very unique and magical flower. Thank you for asking these interview questions—it has improved my mood, since I have only found weeds so far today. I am hoping for better luck after lunch, which, sadly, is peanut butter and raisin sandwiches, olives, and yellow tea again.

Elizabeth Haydon was working in educational publishing in 1994 when she met up with an editorial friend and mentor in New Orleans at the American Library Association conference. He asked her to write for him a fantasy that might cross over to other genres and contain some of their shared mutual interests: medieval music, history, anthropology, and herbalism among others. Thus, The Symphony of Ages was born. These novels have made numerous "Best of the Year," as well as national bestseller lists. A harpist and madrigal singer, Elizabeth Haydon lives on the East Coast with her husband and three children, where she is writing fantasy novels for both The Symphony of Ages for adults and the Lost Journals of Ven Polypheme for children.

Posted by MichelleNorris at 8:23 AM