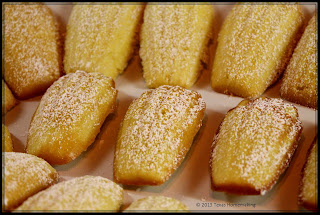 The Fare of France, otherwise known as the Madeleine of Commercy, is a delectable tea cake often confused with a cookie due to its delicate nature and simple portability.

Once described as the cookie with the greatest literary clout, the Madeleine found its way into Marcel Proust's prose, Remembrance of Things Past.

"No sooner had the warm liquid mixed with the crumbs touched my palate than a shudder ran through me and I stopped, intent upon the extraordinary thing that was happening to me. An exquisite pleasure had invaded my senses, something isolated, detached, with no suggestion of its origin. And at once the vicissitudes of life had become indifferent to me, its disasters innocuous, its brevity illusory – this new sensation having had on me the effect which love has of filling me with a precious essence; or rather this essence was not in me it was me. ... Whence did it come? What did it mean? How could I seize and apprehend it? ... And suddenly the memory revealed itself. The taste was that of the little piece of Madeleine which on Sunday mornings at Combray (because on those mornings I did not go out before mass), when I went to say good morning to her in her bedroom, my aunt Léonie used to give me, dipping it first in her own cup of tea or tisane. The sight of the little Madeleine had recalled nothing to my mind before I tasted it. And all from my cup of tea."

Created from a genoise cake batter, the Madeleine is a lightly sweet and irresistible shell-shaped dessert which has found its way to my heart. I often prepare these adorable treats for a variety of settings - most recently, for a tea party at the park.

While not difficult to make, Madeleines do require a thorough knowledge of the recipe and a special shaped pan. While there are many recipes for Madeleines (including chocolate ones!), I've used this recipe most often. 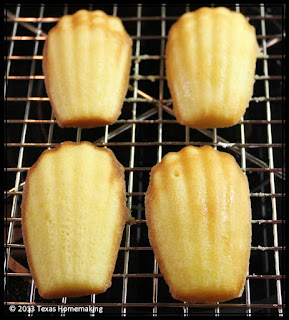 Preheat oven to 350 degrees. Melt the butter in a small pot over medium heat until it is slightly brown and gives off a nutty aroma, approximately 20 minutes. Strain through a fine meshed strainer to remove solids. Cool the butter to ambient temperature.

While the butter cools, prepare the Madeleine pan using non-stick spray and a light dusting of flour. All ridges and creases need to be properly greased and floured; make sure to repeat this process through each batch of Madeleines.

Mix the eggs and salt using an electric mixer (I set my KitchenAid to high) and the whisk attachment. The volume of the eggs needs to double or triple; mix approximately three minutes. Continue to mix on high while slowly adding the sugar. Mix for 2 more minutes or until it has come to ribbons. Now, fold in the lemon zest, vanilla, and honey.

Sprinkle the flour on top of the egg batter and gently fold the flour into the batter. Fold in the butter as well.

Spoon the batter into the molds, taking care not to fill them as the genoise batter will spread. I like to fill each mold about 2/3 the way full. Bake the Madeleines for approximately 7 to 10 minutes or until the edges are golden brown. Unmold immediately and allow the tea cakes to cool on racks. Dust with powdered sugar and serve.

Madeleines may be stored in an air tight container for up to 2 days, but are best when made mere hours before serving. I sometimes will melt chocolate and dip half of the Madeleines for an alternative to serving. I've also been known to add them to my cakes. Enjoy!

Posted by MichelleNorris at 1:08 PM