The Review Is In :: Kid Crazy and the Kilowatt King - A Quirky Fantastical Children's Story 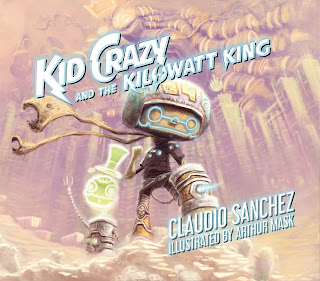 If you’re looking for a different kind of bedtime story for your quirky child, look no further than Kid Crazy and the Kilowatt King written by Claudio Sanchez and beautifully illustrated with a sci-fi meets steampunk vibe by Arthur Mask. “The idea for Kid Crazy actually started as a rock opera in the vein of Ziggy Stardust and the Spiders from Mars,” says Sanchez, “but as it took shape, it began to feel like something that could appeal to a child’s imagination—a kind of fantastic journey with a lesson.”

The 80-page story begins with a Kid Crazy seeking out a better way of life in his world by adventuring to the City with a strange droid named Denunzio Gots. The City is ruled by the ever-grumpy King Kilowatt, a rude king who makes his subjects sing to him. The pair set sail in a car made of bread through a fantastic and beautiful landscape. When Kid eventually meets the king, he decides it’s time someone teaches him a lesson about the power of the word “please.”

Not only of the illustrations colorful in this futuristic tale, but the written words conjure the imagination to create its own images: pigeons in pearls, melting candy bar men, trees made of embers filled with dragonfly birds, and more. Sanchez, also a singer/songwriter, does a great job at captivating the reader's attention with his colorful phrases converted from his original song, "A Friend to Enemies."

My youngest son enjoyed the rhythm of the story and the details of the characters. He thought the illustrations were marvelous and overall, he enjoyed this book. I loved the opening dedication quote to the author’s son, “If ever you feel the world is on your shoulders, remember: it’s actually in the palm of your hand. “

Kid Crazy and the Kilowatt King is available from Indie Bound and on Amazon.

Claudio Sanchez (author) is the front man for the conceptual rock band Coheed and Cambria, with over 3 million albums sold worldwide. He is also the creator of several comic books, including The New York Times best-selling series The Amory Wars.


inspire him: from horror movies and music to retro video games. His mother says his first drawing was of a mosquito, but now he prefers to draw monsters. He lives in Sao Paolo, Brazil.

{A free copy of this book was provided from the publisher, One Peace Books, and by PR by the Book, for review by Texas Homemaking.}
Posted by MichelleNorris at 8:04 AM