Homeschooling: The Book of Marvels and Reflection upon the Destruction of Cultural Heritage 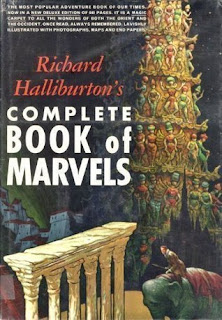 If you’ve never read a Richard Halliburton book, it’s not too late to pick one up. While mainly written for a younger audience, Halliburton’s Complete Book of Marvels is filled with his travels around the world in two mesmerizing parts: The Occident and The Orient. Writing and traveling during the 1930s, Halliburton scoured a world that is relatively unknown or unfamiliar to modern man today. While we can easily search his locations for images and videos, the peoples of the past are most certainly changed, and along with them, the cities and customs of the time.

Our family uses Halliburton's adventures and explorations as a geographical and historical resource to glean more into our world's sites and historical past. Included in The Orient section, Halliburton has a wonderful account of the ancient wonders of the world and not only depicts his present day travels through the lands, but includes a conceptual voyage of an ancient Grecian and his son.

This morning, as I read the chapter about Halliburton’s visit to Baghdad, I caught myself pausing as tears welled knowing that Halliburton had seen and experienced a place whose essence is almost completely lost. Ravaged by modern war with antiquities destroyed, Baghdad is but a shade of its former self.

In his own words, Halliburton describes his Baghdad as a scene straight out of Arabian Nights filled with merchant shops selling Persian carpets and silks, caravans of camels and donkeys parading through the streets, glittering minarets glistening in the sun, and more.

It is when the reader comes to this line that he knows all too well, Halliburton’s Baghdad is lost: “The ways of the western world may some day destroy the romance of Baghdad. But that unhappy day has not yet come.”  It as if Halliburton is a prophet speaking words into truth.

As a child, I watched the constant shelling of Baghdad on the nightly news. As an adult, I had the unfortunate chance to watch it all again. I remember reading articles describing the looting and destruction from the National Museum of Antiquities in Baghdad during the siege in the early 2000s. The museum held the tablets with Hammurabi’s Code and cuneiform texts that are the oldest known examples of writing—epic poems, mathematical treatises, historical accounts. Eighty percent of the collection were stolen or destroyed.

In Halliburton’s story, he flies the young Prince Ghazi, King Feisal’s son, over Baghdad and to the ancient city of Babylon. I imagine today, the landscape looks very different. I assume, progress and technology has increased the volume of the city and given it a more modern look than in the 1930s, but I also know it to be war marked, like the ancient ziggurat in Ur filled with shrapnel holes. Today, cultural heritage sites and historical documents are being destroyed at a rapid rate by those who would erase history: the cities of Nimrud and Hatra, the tomb of Jonah, 113,000 irreplaceable manuscripts burned at the library of Mosul, among many others.

It saddens me to know that my children and I will never know the beautiful glittering city of Baghdad from Halliburton’s day. I can only guess at how many other locations brought to life in the Book of Marvels will be gone before our time is over.

{Please note, this book is considered out of print at this time and a copy can be quite expensive to locate. Always check used book stores first.}
Posted by MichelleNorris at 9:42 AM